The name of this room also harks back to Aachen’s traditional clothmakers’ guild. The video wall features film footage of war-devastated Aachen in 1944. An interactive photo album and an audio station complete this theme exhibition. The fireplace, dating from 1668, shows in wrought brass the coat of arms of the incumbent mayor at that time on the pediment, while on the frieze two master craftsmen and two city architects are immortalised. On the cast iron plate you can see Charlemagne with St. Mary’s Church and Aachen’s heraldic eagle. The north wall boasts a splendid portrait, painted by Anton von Werner in 1890, of Wilhelm I in front of the Town Hall, which is festively decorated in celebration of the 50th anniversary of the unification of the Rhinelands with Prussia. Beneath it there are two portraits of his parents, Friedrich Wilhelm IV and Elisabeth of Bavaria, both painted by Wilhelm Hensel (1857). 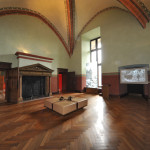 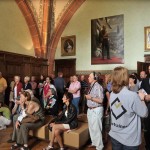 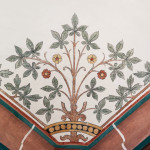