The Master Craftsmen’s Court is one of the most beautiful examples of the Aachen-Liège Baroque style. In the old days, it was in this room that the clothmakers had to submit their products for inspection by a committee of jurors, the master craftsmen of the guild, who would only approve the bales for export after intense scrutiny. A portrait of Charlemagne (by J. Ch. Bollenrath, 1730) commemorates those times. The remaining portraits depict Aachen mayors who presided in this room up to 1995. Bollenrath also created three large murals, the most important of which can be seen on the south wall: “Peace and Justice”. The cycle is completed on the west wall by “Susanna and the Two Old Men” and on the east wall by the “Victory of Virtue over Vice”. The Baroque wood panelling came from the workshop of master cabinetmaker Jacques de Reux from Liège. In front of the windows there are three display cabinets containing the Golden Book, the Lord Mayor’s chain of office, and the historic civic silver. 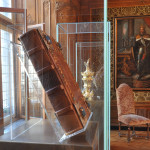 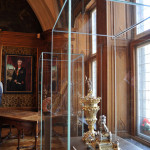