Starting in 1727, this room was redecorated by Italian stucco artists and transformed into the Town Hall’s small celebration hall. In addition to the hand-modelled stucco work, six portraits of prominent figures catch the eye. These are the envoys of the powers that brought an end to the Austrian War of Succession with the “Aachen Peace” in 1748. The best known of them is the British noble John Montagu, the third Earl of Sandwich (1718-1792), famous most of all for the fast food named after him. His portrait hangs on the south wall on the right.

Before leaving the room, take a look at the magnificent work of the Italian stucco artists. Keep your eyes open for a winged “horse” with a goat’s head, a bird’s tail and woman’s breasts! In the four medallions you can see symbols of antique sovereign virtues: the fasces and yoke, the sword pointed towards heaven between the Pillars of Hercules, the Ten Commandments with a pair of scales and finally a lion with a sceptre. 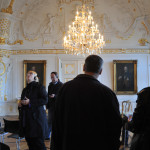 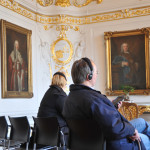 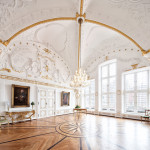