The Granus Tower is unfortunately not open to the public, but you have the opportunity here to gain an impression of this oldest surviving section of the former imperial palace.

The Granus Tower was built together with Charlemagne’s King’s Hall at the end of the 8th century and beginning of the 9th century. Its lower four storeys, up to a height of about 20 metres, date back to that time; its fifth and sixth storeys are from the 14th century. Over the years, its spire has been repeatedly destroyed by fire or war. The spire you see today was erected in 1979.

From the outside, the tower looks relatively plain, but its interior, especially in the four Carolingian storeys, has a very complex structure. A staircase winds its way around mostly vaulted inner rooms. This staircase once connected the main entrance of the tower on its lowest storey with two further doors on its second and fourth storeys. These doors led into the upper storey and the roof of a portico that stretched along the whole of the south side of the King’s Hall. No traces of this portico remain.

A channel used to run underneath the tower, and a surviving shaft on the lower storey suggests that it was used either to bring in fresh water or to carry off sewage. From the third storey upwards, the exterior walls of the tower show traces of small horizontal and vertical channels. In contrast to what was assumed until recently, these did not in fact serve as part of a hot air heating system. Imprints from timber beams in the mortar indicate that these channels are simply cavities left behind in the masonry by a wooden scaffold that has long since decomposed. This scaffolding probably served during the construction of the tower to mark out the complicated spatial structure for the masons.

The extreme complexity of this extravagant construction project is probably the reason why there are hardly any imitations of this stairwell concept to be found elsewhere in medieval architecture. Furthermore, because the tower is not mentioned in any of the surviving Carolingian texts, its original function has been the subject of much speculation. It has been construed as a fortified tower, a residential tower and a treasury tower. However, in view of the fact that it is not possible to monitor the surroundings from its high-set windows, that its interior rooms were not illuminated and that none of the interior doors were adequately secured, it is unlikely that the tower was used for any of these purposes. The attention of architectural archaeologists is focused much more on the staircase, which, because it winds around the outside of the interior rooms, has a comfortable pitch and is well illuminated from all sides by the windows. All the evidence suggests that the tower was a stairwell concept borrowed by the Carolingians from Byzantine architecture. But, unlike the Byzantine model, which had a continuously climbing structure, the Carolingians built a separate flight of stairs for each storey to link the points to which the stairs were intended to lead. The interior rooms may have served as waiting rooms or “lay-bys” into which groups of persons could be diverted in order to manage traffic coming from different directions. In addition, three discernable three-quarter columns clearly indicate that this was not a purely functional stairwell. We can thus safely conclude that this staircase and the spiral staircase in the western structure of St Mary’s (today’s Cathedral) are the oldest surviving representative interior staircases north of the Alps, even if we are still left to speculate about the exact functions of the portico of the King’s Hall to which this staircase led.

In later medieval sources the tower is referred to as “turris regia” or “saltorn”, which underlines its connection to the King’s Hall. It is only since the Renaissance that it has been referred to as the “Granus Tower”. In those days, the tower was construed as a relic from Roman times and the home of the legendary founder of the town, Granus Serenus, a brother of the Roman Emperor Nero, as the legend would have it. In the course of its history, the tower has been used for a range of different purposes. At one time or another it housed the quarters of the tower keeper, the city’s documents archive, and even a prison. Today, it stands empty. For conservational reasons it is not possible to open the tower to the general public.

The author works at the Department of Preservation of Historical Monuments at the RWTH Aachen University and is one of the leading experts in the research of the Aachen Palatinate. 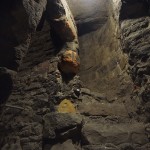 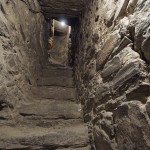 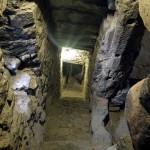 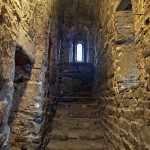 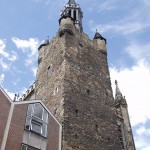 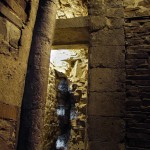