This double-span hall, whose five cross-ribbed vaults are divided into sections by four mighty columns, is 45 meters long and 18.5 meters wide, and on its completion around 1349 was the largest secular hall in the Holy Roman Empire.

It is this hall that lends Aachen’s Town Hall its unique character and distinguishes it from all the other town halls in the realm. While in the Middle Ages it was the coronation banquets, today it is the International Charlemagne Prize that gives the hall its European significance. This is indicated by the three coats of arms over the dais: in the middle, the Staufer imperial eagle, since 1351 the emblem of the free imperial city; to its right the double-headed eagle, since 1433 the heraldic emblem of the Emperor; and to its left the Aachen Cathedral Chapter’s “Coat of Arms of Charlemagne”, which since the 15th century has united the French lily and the German eagle. 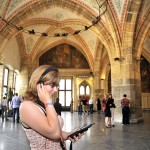 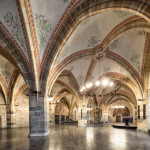 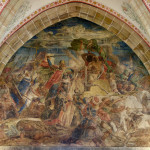 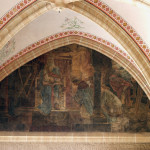 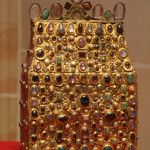 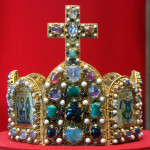 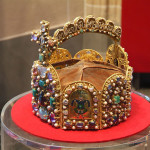