The ceiling mural in the first vault shows a renaissance painting from the year 1628 portraying Plato’s four cardinal virtues. Female figures hold a book, symbolising wisdom, a pair of scales, symbolising justice, and a mirror symbolising moderation. They are joined by a lion as the symbol of courage. In the rear, eastern vault bay the ceiling murals, dating from 1730, depict scenes from the antique realm of the gods. The wood panelling, the work of master cabinetmaker Jacques de Reux from Liège, dates back to the Baroque renovation that began in 1727.

On the east wall of the room hangs a portrait of Charlemagne that originated from the imperial abbey in Werden near Essen. It was painted by an unknown artist around 1600. On the south sidewall you can see portraits of rulers from the Habsburg dynasty: from the left, the last Roman Emperor Franz II (later Franz I of Austria), followed by Karl VI, father of Maria Theresa, who hangs to his right, and finally the portrait of her consort, Franz I.

If you now turn to face the exit, to the left and the right of the door hang two large portraits of the Emperor Napoleon I and his spouse Josephine. The portrait of the empress, painted by Robert Lefèvre in 1805, recalls her stay at the spa in Aachen. The portrait of Napoleon was painted by Louis-André Gabriel Bouchet shortly before 1807. Napoleon presented the paintings as a gift to his “good city of Aachen” in 1807.

The Town Hall has been the traditional workplace of the city council and the Lord Mayor, from 1349 right through to the present day, with just a few interruptions between 1943 and 1951 due to the war. 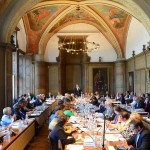 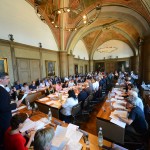